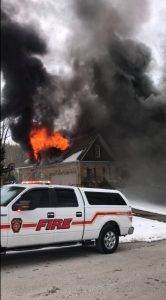 The homeowner suffered minor burns and some smoke inhalation while trying to extinguish the fire in the home. Two pets were able to be found alive in the house, but no word on their conditions.

14 Crew Members from Lafayette and Greenville firehouses were on the scene for over 4 hours and 30 minutes for extinguishment, salvage, and overhaul. Greenville firehouse had a crew of 4 firefighters on the station. The Lafayette firehouse had a crew of 4 firefighters on station to cover for other calls that may have come in throughout the County. The Salvation Army of New Albany responded with their Canteen truck to keep the firefighters warm and hydrated during the operation.

The Cause of the fire is under investigation.