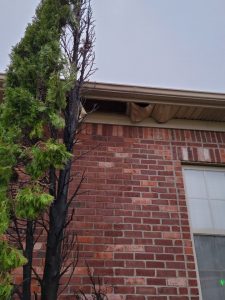 11/15/22 On Tuesday morning, just before 8 A.M., a tree was on fire next to a home on Crestwood Drive in Floyds Knobs, In. An alert neighbor who saw the fire alerted the then-sleeping homeowners and called 911.  Lafayette Twp. Greenville Twp and Georgetown Twp. Fire Protection Districts responded to the call. The homeowner was able to extinguish the fire with a garden hose. There was minor damage to the home, but it could have been devastating if not for the neighbor’s quick actions.  The homeowner and the fire department are grateful to the person who alerted the homeowner and called 911.